Share what you're listening
ON AIR
Celi Bee & Buzzy BunchSuperman1977
NEXT ON AIR
Andre' CeccarelliLife Is Real Only Here
The FlirtsHelpless (you Took My Love)
Donna Summer Ft.barbara StreisandNo More Tears (enough Is Enough)

San Francisco 1969, Led Zeppelin & The Rare Shots Of Photographer Herb Greene At The Fillmore West, As A Support Band Country Joe & The Fish. 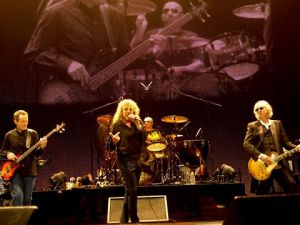 In 1969, Led Zeppelin, just weeks after the release of their debut album, they were in San Francisco - were busy, in fact, in their first American tour. During the four-day stay in the California town (where they played at the legendary Fillmore West, as a support band Country Joe and the Fish), did a quick session with Herb Greene, a photographer who knew nothing of this small British band still little known. 'I knew the Yardbirds', explained Greene, 'but I knew nothing of this new group within Jimmy Page. Anyway, they called for a session because they needed some promotional glossy photos, the '8-by-10 glossies', the music industry slang of the time'.

According to the memories of the photographer the shooting did not last even an hour, but in those few minutes were taken many photos - most of which were then used very rarely and therefore are little known by the fans.

Moreover, the session did not last long because at some point came the Grateful Dead who needed some photos urgently; but Ron 'Pigpen' McKernan pulled out a pistol and began to fire in the study - scaring Zeppelin who left without even paying.

Because of the rarity of these photos, Greene has also assembled a special portfolio in limited edition deluxe (21 specimens in the world) that contains the 18 best shots of that session. Everything is for sale at the modest sum of $ 15 000 (you read that right: fifteen thousand) per piece. If you have this sum to invest, click here.