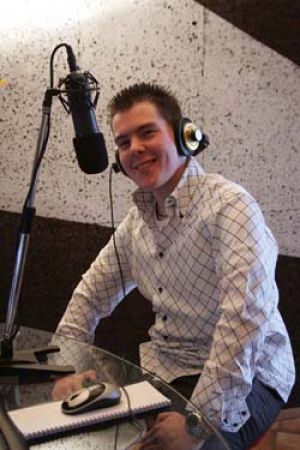 In 2003, he moves his first steps into the world of the radio. inside Radio Montorfano - Rovato (Bs ), with the role of technical director, and later as a speaker.

In 2008 the collaboration with Playoneradio, where he held many positions within the technical field of radio. In addition to directing during live radio broadcasts, often in console, music or lights, at parties and events.

In January 2009, he become press secretary and p.r. of Harold James. In August of the same year he was contacted by Radio Voice Inblu and hired as technical director.

Tia currently takes care of the technical part and the direction of the 'external' direct of the radio, in addition to being an administrator of the Facebook page.

Professional speaker, radio host, copywriter, radio author, consultant. He is the "Discocity Live" conductor.
Events
My Rock Is Gonna Get You

An unmissable event, an exclusive unique and unrepeatable national live event, for Studioradio.it only. Back 'Summer Goodbye' ,at the Imperial Bay, la Baia Imperiale.
Events
The International Radio Festival

Radio City 2017. In program from 21 to 23 April 2017 in Milan, Italy, with the best national and international radio. Studioradio live streaming directly from Milan.
Programs
New Classic On Studioradio

The most important songs of the last years to become the classics of Studioradio, and come right in its vintage planning.