All The Charisma Of The Boss In A Concert With A Thousand Emotions. The Eternal Youth And Bruce Springsteen At San Siro Filled The Capacity. 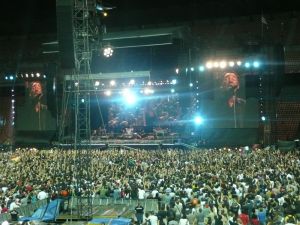 The Springsteen concert at the San Siro on 7 June was an extraordinary event: the boss has kept firmly in hand the situation for 3 hours and 45 minutes with his second longest concert ever. The longest dates back to 1980, just think. The boss used to show mileage there: in 2009 in Rome abundantly surpassed the three hours with no signs of slowing down. So it was also in Milan.

If it is true that the entry in the final seemed a little hoarse in recent songs is miraculously resurrected giving us a Twist and shout that had all the characteristics of a sound tsunami. Extraordinary the glance of the public: go yourselves to watch everything that was posted on YouTube. You will see a lot of crowds move rhythmically throughout the show at the time of the boss music. And what about the E Street Band? Orphans of Clarence Clemons and Danny Federici is one of the largest groups are still shown which currently treading the scenes. Bruce had declared that it was impossible to replace Clemons because its volume of sound was unique. So he called to his full six breaths place among them his nephew Jack. We must say that his grandson not fared badly even if the original was quite another. There were the usual interludes with the public: Sunny day at Bruce recovers a child from the front seat and is home to the microphone to sing the famous chorus. In the chorus of dancin in the dark here that a young girl is welcomed on stage to dance with the boss. But one out of the program: Always during the song a girl waving a sign - '' Can I dance with Jake? '' - And is, she too, ushered on stage to dance along with the saxophonist. Intermezzo fun and very addicting. The boss is not new to similar happenings: his concerts are experienced as an act of faith by all present participating emotionally and intimately with each song. The Bruce texts should be analyzed one by one, rarely are trivial, almost always could even withstand without music. Add to this a musical explosion that has few equals today, we realize that the experience may be cathartic for hardcore and shocking sprinsgteeniani for newbies who are as involved in a musical happening that has few comparisons. And mind you: no special effects, no dwarfs and dancers, light show, video and the rest. The show is on stage or in the stands is no accident that when it is dark the lights of San Siro remain partially lit because each person can see themselves spotlight with '' E Street Band ''.

For some years there has been a major revival of the importance of live concerts. Almost no one now uses the show to promote a new album. Many musicians even depart on tour without a new album to be offered. The point is that for about ten years anyone can listen to any type of music produced in the world is the recent 50-60 years ago, at any time with a simple click. The music collectors are becoming eccentrics (and not coincidentally prefer the vinyl that is finding a new market eroding a little something to the so-called domain) and only the concept of '' own music '' in a few years will be considered an oddity. The music is in the background now everywhere and it is increasingly difficult to get to LISTEN to music. The mere fact of owning a CD with the ability to jump from one song or an Ipod with all the necessary functions (create playlists, and so on) leads into temptation and often we stop to listen to only a few fragments of song. The vinyl leads instead to a more conscious listening as it is still more complex change tracks and even the operation itself requires a precise ritual quite different from simply insert a CD into the player. The vinyl must be cared for, they can not mistreat, once put on the plate should be listened to, the cover is more beautiful and definitely sound better. But that's quirky and original music lovers. They are not few and they are not all over fifty as you might think. Just go in record stores (endangered species) especially abroad for young fans buy vinyl albums and snub the cd.Naturalmente it comes to strangers disks (I quote the first names that come to mind): Admiral Radley, Chromatics, Guided by voices, LCD Soundsystem and so on. If you go to London pop into Rough Trade, for example, from the parts of Spitalfields. The same is true for some years for the concert. To begin with there is more and more people on the road because the real source of income for now musicians are the concerts. The sales manager of a major chain (no names) told me ''Madonna's last cd? I have not sold a single one. The boys are not interested in their forties the downloading and also costs 20 euro ''.

The concert also has a second value. The live music, the foregoing views (futility of collecting records, immediate availability of any old or new piece of music, music that is hardly heard in full) gains value as it is impossible to copy or to share (it will be later when I put the video on YouTube did with their cell phone), the audience feels part of a community and really listen to music together. Gone are the times when we find ourselves together to listen to Sgt Pepper's, today we are all deconnessi automata in our Ipod. In the concert there are no pauses, you can not use the shuffle feature, is an experience that requires constant attention and an uninterrupted listening. In short, something absolutely new for the digital natives and also for all of us that we broke up involved with you tube, Ipod, CD, download short, everything that makes us listen to the piecemeal music like everything was an immense compilation (er uh, it says playlist). Today when the choice is almost unlimited, the rock concert is equivalent to a liberating moment in which I am free to let me drown the sounds and they are aware that the event will be unique. These general considerations apply of course also for the concert in San Siro. But we do not lump everything. There are artists who are followed in a particular way. Recall the Grateful Dead in America in the seventies. Real psychedelic trip where the Jerry Garcia band was performing for hours followed everywhere by Deadheads, the name you were given the fans, true followers of a community It would of course other examples, the contemporary equivalent of the Dead in America are certainly Phish. A few other occasions, however, I caught such a partnership between public and artist. A similar emotional level has certainly been achieved at the Assago concert by Paul McCartney. With a difference.

Paul gives us a dream and the ability to believe in utopia, Bruce instead a message of hope : "It's a town full of losers and I am polling out of here to win". 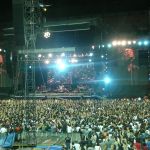 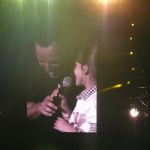 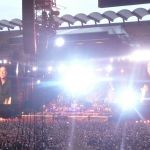 Piero is the Editorial Director of Studioradio, and is also responsible for programming and record reviews. He is specializes in rock and jazz, working with 'Buscadero' magazine.
Programs
Northern Soul

Technical director of the external direct of Studioradio, he is the Facebook page administrator.
Events
Rome Web Fest 2015

Rome Web Fest 2015, the movies at the time of the web, at the National Museum of XXI Century Arts, Maxxi, in Rome. Studioradio present with its own stand.
Events
Summer Goodbye 2015

An unmissable event, an exclusive unique and unrepeatable, live, only for Studioradio.it. 'The Night Of The Angels' is back at the Imperial Bay. Live Streaming !