Roma Web Fest, cinema Meets Web. 25, 26, 27 September 2015 at the Maxxi, the National Museum of XXI Century Arts. Studioradio is present with its own stand at the Maxxi Theatre in Rome, with envoys Beppe Profeta and Alberto Musi. On day 26 it was dedicated to the fashion world with the award ceremony of the competition for fashion film that has opened July 2 - and with a special event:

Rome Web Fest in collaboration with the Academy of Luxury, it presented an event to pay homage to 'The Great Beauty', Oscar signed by director Paolo Sorrentino. Nine fashion film resulting from the collaboration between emerging designers of the 'Accademia del Lusso' and nine talented filmmaker who saw nine protagonists of the most interesting and follow Italian fashion blogger: Ida Galati, Martina Cancellotti, Fabrizia Spinelli, Nadia La Bella, Martinandrea Chiella, Valentina Marzullo, Tamara d'Andria. Eleonora Branca, and the only man in the group, Edward Alaimo. 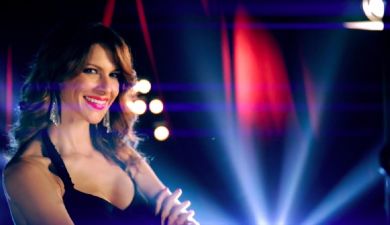 Exception partner for this project , strongly backed by the founder and Artistic Director of Web Fest Rome , Janet De Nardis , were L'Oreal and Simone Belli for the Academy for the hairstyles and make-up ; the L'Oreal Academy in Rome also became a set for the fashion film footage that has hosted more than 100 people between fashion bloggers and actors including Anthony Peth and many graduates of Artists .

RWF is the first festival dedicated to webseries , the cineserialità exploded on the net and Fashion Film . Three days dedicated to the best experiences for the web , now become the new frontier of television and film storytelling, independent and not . With the collaboration, participation , and live interviews of Studioradio.it .

In the cover photo in the center above , Janet De Nardis , organizer and artistic director of the event.

Technical director of the external direct of Studioradio, he is the Facebook page administrator.
Events
Summer Goodbye 2015

An unmissable event, an exclusive unique and unrepeatable, live, only for Studioradio.it. 'The Night Of The Angels' is back at the Imperial Bay. Live Streaming !
Events
Paolo Attivissimo Lands In Italy

Paolo Attivissimo, the famous Swiss bloggers lands on Italy, Iseo Lake, to a series of initiatives aimed at students in the district of Upper Sebino.
Events
My Rock Is Gonna Get You

The second edition of the mega rally of Peeter Club and Mary Baby Disco's. The music of the best years in partnership with Studioradio.
Events
Peeter Club, 1° mega rally