For 20 weeks starting on 13 May 2017, the City of London will be rock-rich thanks to one of its most iconic museums, the Victoria &amp; Albert in South Kensington, which hosts an exhibition destined to become an unprecedented cultural event: The Pink Floyd Exhibition, Their Mortal Remains, dedicated to one of the most influential (and beloved) bands on the planet. For the 50th anniversary of Arnold Layne, Pink Floyd's first single, the V&A decided to do things big, hiring a team for the exhibition to collaborate side by side with the members of the band in the flesh and in particular with drummer Nick Mason, the only one present at the inauguration among fans understandably in delirium. Among the big names are Aubrey Powell of Hipgnosis, the design studio that has created many of the best-known cover albums in music history, including The Dark Side of the Moon and Wish You Were Here, both admirable to the exhibition in the form of original photo posters. That the Pink Floyd's paw in person is present in the exhibition's exhibition layout is manifest from the beginning to the end of the extraordinary multisensory path that of the exhibition is the essence. From the opening rooms, dominated by an atmosphere and psychedelic lights that perfectly match the early-career sound experiments – the mythical Sixties of counter-culture and Pop Art – we gradually move, with the central halls, to the break with the past marked by the release on the record market of Atom Heart Mother that catapults the viewer into a new musical and visual universe , deliberately renewed and altered by the band: that of the mammoth live shows of the seventies and their gigantic puppets and 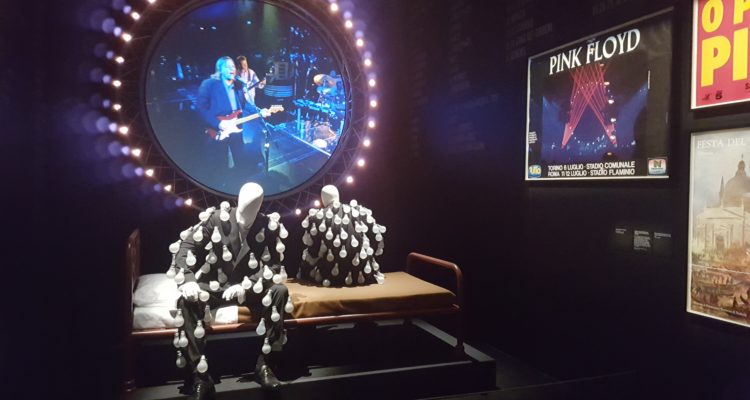 extravagant objects, all on display at the exhibition. Mature fruit of a collective mind – although often characterized by the standout of a creative personality over the others, think for example of Waters in Animals or Gilmour in A Momentary Lapse of Reason – which has never stopped putting itself on the line, improvising and experimenting unparalleledly in the history of music. So much so that, in an interview projected by a panel of the exhibition, the musician Howard Goodall talks about The Dark Side of the Moon, the most remembered icon and stylistic figure of the group, as an unprecedented album, within which – paraphrase his words – any minute you want to listen, no matter what, leaves no doubt that it comes from that album and from that group only (the Gilmour himself states shortly after in the interview that , when he first heard it after recording, he exclaimed, "We have done something really fantastic here". 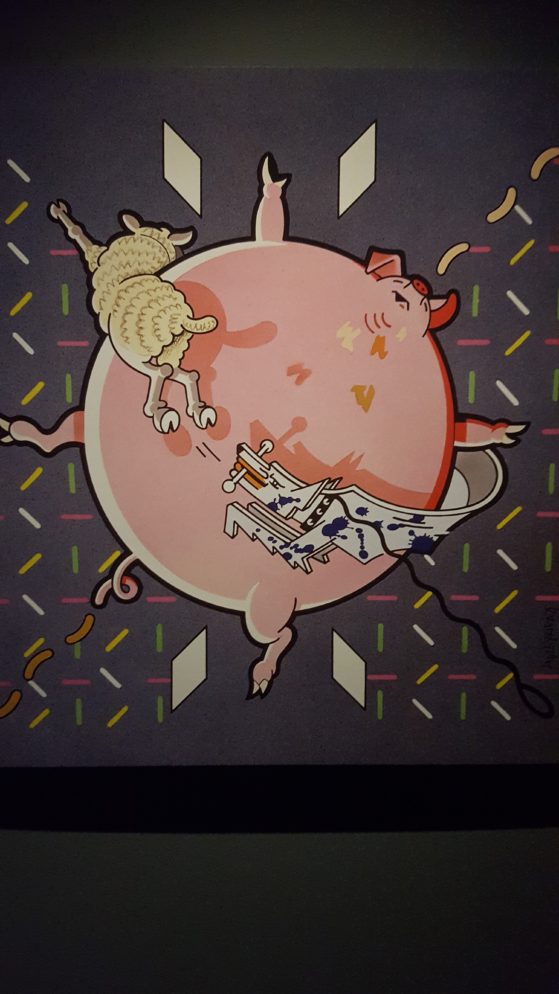 The Pink Floyd Exhibition offers the visitor's eye an eclectic range of articles, many of which have never before been exhibited to the public, that exhaustively trace the band's biographical and musical path: the doubled-scale reproduction of the Bedford van, the black-and-white van painted and used early in their careers to transport instruments, when they were called Tea Set and were still fresh from their architecture studios; various letters of the members written to girlfriends or family: curious in particular that of Gilmour to parents to reassure them about his recent membership of Pink Floyd in '68, at a time when joining an underground band was often synonymous with close contact with drugs; and then vinyls, personal objects, the circular screens of live from 1974 onwards, musical instruments, amplifiers and synthesizers that have articulated in stages their artistic development from 1965 to the present day. A collection that for its heterogeneity only reaffirms the originality and innovation that have always distinguished the history of the group, evident especially in the deep thematic differences of their songs: the folk folklore of the beginnings, the Chinese poetry of A Saucerful of Secrets, the human nature treated in all its aspects by The Dark Side of The Moon, from birth to death , from greed to consumerism, and again the theme of the absence (by Sy Barrett) in Wish You Were Here and the criticism of the war of The Final Cut. What impresses the band most, and which the exhibition highlights with mastery, is that the ears of its members have always been tense and attentive to carve the revolutionary fragments and cultural echoes of the century like those of no one else: so, when the visitor is in front of the inflatable pig icon of Animals, can only think of Orwell and his novel Animal Farm about three decades before , whose allegorical characters are continually recalled from the album in songs such as Dogs and Sheep and whose spirit of denunciation is subtly reproduced by the contemptuous words of the lyrics. Similarly, in front of the puppets and animations made by Gerald Scarfe for the tour of TheWall, the viewer will remember the live album that Waters, after the first release in 1979, recorded specifically in 1990 to mark the fall of the Berlin Wall occurred a year earlier.

Pink Floyd and culture have mutually influenced each other, they are like the object and the subject in Kant, one can not exist without the other: the revolutionary cultural spirit makes them grow and gives them a precise record identity, and the musicians on their part make the favor by imprinting the musical culture a new direction, exerting on it an unstoppable influence. For this reason, the audio-video path that the visitor, headphones to the ears, undertakes, is chronological only on paper: each stage of the exhibition is in fact never completely in its own right, but refers to a previous or later experience, which gently traps in a labyrinth of flashbacks and flashforward. 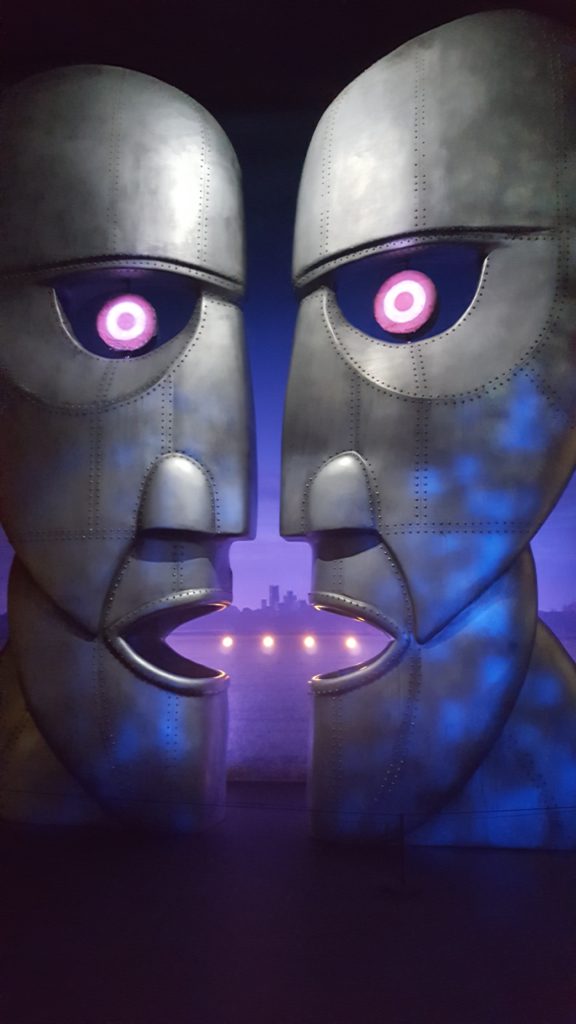 As with the giant stone masks of The Division Bell, positioned in profile in an exhibition hall as in the tour of the time (1994), to give the impression that they are talking, so Pink Floyd together with the curators of the V&A engage with the public a silent communication, made of visual and auditory impressions that affect him with sensations. The voices of the protagonists and the basics that have made history, listenable with the headphones provided by the museum, the lights, the photographs, the guitars, the colors: everything is built specifically for a path that goes beyond the simple exhibition of the remains of an immortal band (the remains that give title to the exhibition) and that makes us reflect instead on universal themes, on the importance of communicating with people and its limits, that the same turbulent coexistence within the band. Often marked by disagreements and deep divisions (until the breakup and separation from Barrett's group first and Waters then), it is significant to note that the surviving members do not all come together even at the inauguration of the event that celebrates them. Perhaps, as some critics have observed, it was precisely the heated divergence that fueled their unattainable creativity, an expression of change as the only constant of their music, of "a soul" – to use the words of Learning to Fly – "in tension that is learning to fly/bound to the earth by condition but determined to attempt". The artistic path of Pink Floyd is a river in full that never stops, the endless river that gives its name to the last album of the band (2014), with which the exhibition closes, and which is also the penultimate verse of the song High Hopes belonging to The Division Bell, as if to resume with the public a speech interrupted twenty years before. A sense of continuity that can be seen well from the zeal with which the organizers of the exhibition, but not least the fans, have helped to make even more indelible the name of Pink Floyd in the music scene of every era. Whether it's the rebels of the 1960s, absorbed by the psychedelic atmosphere of the Ufo club where Pink used to perform, fans plunged into obscurity and blinded by the bright shows of the Seventies, or the camped in the cold during the tours of the late 80s and 90s, The Pink Floyd exhibition offers a community moment to entire generations: those who visit the exhibition are the last representative. 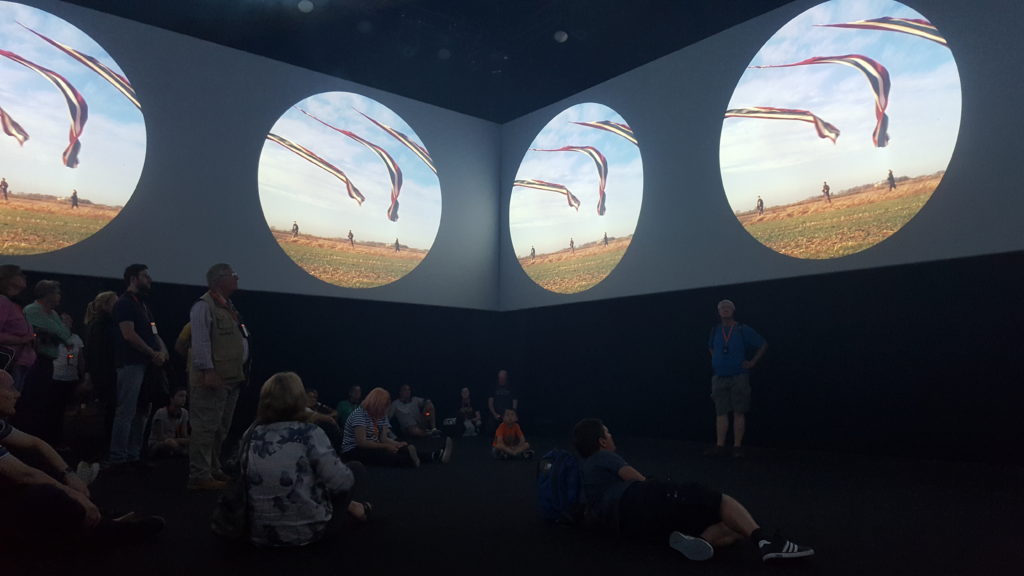 The photographs were kindly courtesy of her friend Catherine Domeneghini.

Angeldeejay awaits you on Studioradio, with the mixed sound of Nephenta of Gabicce, every Saturday evening at 21:30.
Programs
Discocity Live

Are you a Deejay and you like to mix disco, dance & House classics?
Programs
We Can Mix